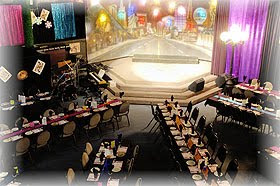 July 25th, 2010 - a Full Moon day. Mark & I (VSPI) arrived at the Giggle Dam, excited to be investigating this incredible theatre after hearing so very much about it. It was a sunny day, not too hot, and calm out. Once we walked through the front doors, we felt the rush of cold air hit our faces and legs. mmm.. a draft is created every time those doors are opened. Interesting, and something to be noted and kept in mind.

Sheila & Jon greeted us with open hearts and minds. I immediately felt welcome, not only be them but by the building. I had begun researching the background of the building, and found some very interesting information: it was built in 1948 & lumber from 3-4 box cars (built to carry ammunitions to the allied forces in the Soviet Union during WW2) was used in the construction. The building was used as a movie house for variety & vaudeville shows. It was originally called the Port Theatre. No further information could be found concerning this, nor when the place became the Column & Surf. However, it is known to have sat empty for a number of years, until the Port Coquitlam Cabaret Ltd bought the place in the early 1990's.

The building became a night club at that stage, and through the years it changed it's name numerous times in attempt to keep it's licence. In 1994, David Lowe (part owner) murdered William Rudy (silent partner) in attempts to keep the club going. David planned the murder, and carried it out in the club. He wrapped the body in plastic in the basement (where there are drains in the floor) & loaned a van to transport it and dump it in the woods at Harrison Mills, just outside of Aggasiz. The body was not discovered for 2 years, a skeleton by then. Once identified, the police found that Rudy had been missing from a motel room in Aldergrove for some time.

A young lad was beaten in the parking lot behind the building, so badly he went into a coma. Two weeks later, he died in hospital in 1998.

There was a shooting in the building during it's club days, but it wasn't critical and the young man survived. The club lost it's licence shortly after.

In 2001 the Giggle Dam leased the building. The club had it's licence pulled a few years previous, and David Lowe stopped by asking the new owners if they needed any help just to ask him as he knew the building very well. In 2002, David was arrested and charged with murder after he blabbed about it to an undercover officer. The police decended onto the Giggle Dam and spent time investigating the building. David Lowe was convicted of murder after a lengthy trial in 2004 and is not eligible for parole for 25 years.

Since the Giggle Dam has taken over the theatre, there have been reports of unusual activity. IE: a shadow man wearing a fedora and long dark coat is seen to be wandering a hallway upstairs near the kitchen; little children have been seen talking to someone on the stage when no one is there; cold spots; feelings of someone standing behind you and watching, possibly even willing to push you down the staircases; loud unexplained noises near one staircase similar to a large metal garbage can being thrown down steel stairs (the floor is carpetted); objects being thrown from above onto unsuspecting staff behind stage, and odd feelings near both the staircases. The Giggle Dam had invited several friends to spend the night Hallowe'en 2009 & had 2 sensitives on hand. They were told of an angry man who throws things & makes noises, a woman from vaudeville days who is seeking for a red shoe & protects the staff from the angry man's violent tantrums, as well as a man named Brian who was stabbed.

After a full day of investigating, VSPI was able to debunk some of the claims, and also gather some incredible evidence to support some claims. VSPI used a variety of equipment and invited Sheila and Jon to take part in the investigation. Nothing was captured on film, EMF fluctuations were explainable due to high voltage areas, copper pipes, power from outside etc; the loud crashing sound was discovered to be coming from the nearby railroad of train cars coming together; cold spots were due to ventilation & air flow through the building; however, there was no explanation for the shadow man, nor for the man named Brian or the woman seeking her red shoe. Using Divining Rods & EMFs, during an EVP session, VSPI & the Giggle Dam staff encountered another spirit. Maria. She told us she had come to the theatre prior to 1946 (before it was built) and was lost, looking for help to not only tell about her unsolved murder, but also find a child she gave birth to a year prior to her death. She told us she was left at Essondale (now known as "Riverview Hospital") by her family after 1930, was raped by an orderly or doctor, gave birth to a daughter in 1933 and the child was taken and sold, and then Maria told us she was murdered in 1934, and is buried at Essondale. Her family & the police believe she died of an accident, perhaps because of her mental illness. Maria also told us she was 17 at her death, of Italian decent but born in BC.

So did this all happen to Maria? Or was the fact that our EMF meter & the Divining Rods simply play tricks with us? We cannot be sure but to chalk it down as a personal experience of 4 people. However, we did some research on what we had, and indeed there were several Maria's reported deceased in 1934 in Essondale, all of child birth years. A search of the cemetery grounds at Essondale did not bring any further evidence. So the search continues to verify this information.

What VSPI did capture is 2 EVPs, both of which are displayed on our website @ http://www.vancouverspooks.com/ under the heading "Findings". Go check them out! Tell us what you hear. A man's voice responding to a conversation we were all having about visiting Maria's grave site at Essondale; and one of a giggle heard clearly. We have accounted for all our voices and know that neither evp discovery is from the team nor the staff.

So where did we leave it? At the reveal, on Oct18th, Mark & I told the Giggle Dam staff that we feel there is unusual activity however not enough to confirm a "haunting". Further investigation was recommended, and the Giggle Dam agreed to ask VSPI to come back. Exciting!

VSPI is so very thankful to the Giggle Dam Dinner Theatre, and to the Port Coquitlam Heritage & Cultural Society for their incredible help and for inviting us to hold a presentation to their members this coming Oct21st, as well as to the Vancouver Public Library for their assistance in finding important newspaper clippings to assist in putting a time line together.

We can't wait for our next visit!
We are taping a radio show interview this coming Sunday evening to be played at a later date. We'll update this blog with the link so you are able to listen to it.

VSPIspook
Kati is the founder of VSPI (Vancouver Spooks Paranormal Investigations). This is her blog about investigation thoughts, events and more. VSPI is a small paranormal investigative group, based in the West End of Vancouver BC CANADA, est. in 2006. We are people of all walks of life; some experienced investigators, others just learning. VSPI is compassionate, trusted, honest and energetic. Check out our Website & contact us today!