VSPI was asked to write an article for the PoCo Heritage & Cultural Society Newsletter coming out in September 2010.. I thought I'd share it with you today: 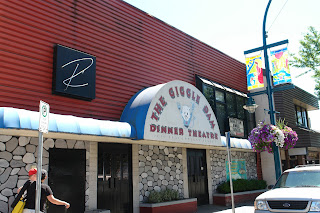 Investigations concerning some odd occurrences the staff has been reporting. Their most recent experience being the cook reported seeing a dark shape of a man walking past the upstairs kitchen and down the hallway. She went to look, and found no one else around. That experience would bring shivers down anyone’s spine! What is going on at the Theatre?

The Giggle Dam staff has reported a number of unusual instances, from a man in a fedora and long dark coat seen wandering, to loud crashing sounds on a staircase, and feelings of someone watching or standing behind you. Last Halloween, the staff invited some friends and mediums to stay the night. They were told of a woman from the burlesque day that is looking for her red shoe; and of a man who appears to be dark and possibly angry, who enjoys throwing items at people. They were also told the woman is protective, thus guides the items out of the way of targeted staff. 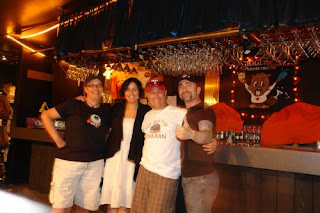 VSPI, who not only attempts to verify and/or debunk paranormal activity, also researches a building’s history. Interesting information has been discovered, yet VSPI is still seeking more. The owner(s) and staff have heard some stories and facts, that it was once a Burlesque Club and Movie Theatre; a murder took place within the building when it was known as the Rumours Club; a young man was beaten, and later died, in the parking lot behind the building; and wood believed to be for or from a Russian Czar, was used in portions of the building’s interior. These historical details became a basis of research by VSPI, who with the aid of the Vancouver Library and the Port Coquitlam Heritage and Cultural Society, came up with some incredible information to assist in putting a timeline together. Kati and Mark, of VSPI, brought in their equipment and spent an afternoon investigating the building, looking to record voices, sounds and possible apparitions.

As Sheila and Jon are not available until later in September, VSPI will not reveal what has been discovered until after their evidence presentation to the two. The Giggle Dam has permitted VSPI to post evidence on their website, and to guest on an internet radio program hosted by KimmieJae of “A Walk in the Reign Radio”, along with Jon to discuss what may be going on at the Theatre.
VSPI would like to extend a BIG Thank You to the Giggle Dam for allowing them to perform a paranormal investigation, and to the Port Coquitlam Heritage and Cultural Society for assisting them in researching the building’s past.

If you have information to assist VSPI and the Giggle Dam, about the past of this amazing building, please contact Kati @ katighosthunter@gmail.com or via their website @ http://www.vancouverspooks.com/ immediately. Your assistance is truly appreciated!

Written by - Kati Ackermann, Vancouver Spooks Paranormal Investigations
Posted by VSPIspook at 9:22 AM No comments: