Green Valley Road: On a grey sprinkly afternoon in late December 2010, Lesli and I took a drive down Green Valley Road, in Sonoma County, looking for a haunted lumber mill. As the story goes, a woman experienced what appeared to be people of a native tribe standing out along a tree line, talking and pointing at the mill, where the woman and a friend were. The woman had an urge to look behind her, and that is when she saw these people. They soon disappeared, but left the woman with a shaking feeling.

The area was known to be inhabited by the Pomo Native tribes prior to the white man storming in and taking over the land. Two ley lines are believed to run through this area, the Goat Rock ley line and the Joy Woods ley line. Where these two lines intersect, is believed to contain some of the most haunted real estate in the county. Green Valley Road is in that vicinity.

Ley Lines: Ley lines and their effect on the paranormal is only one theory VSPI is investigating. What are they? Alleged alignments of a number of "sacred" places of geographical interest, that are thought by certain beliefs to have spiritual power and contain unique energy.
As I am researching "ley lines" and their effect on the paranormal, I've discovered that many agree that there is a certain pull to animals and insects, to these areas of the earths energy. This is fascinating to me, as perhaps this pull is also evident for humans and spirits.

Back to Green Valley Road, since there was nothing much going on, we decided to check out the area. Unfortunately, we did not find a haunted lumber mill, but we did come across the connection to Mays Canyon Road, which is believed to be haunted with legends of its own. So we drove that road as well, and drove back a few days later, when the rains had stopped, to take some photos.

Mays Canyon Road: Was named for the creek that runs along the north side of the road, and 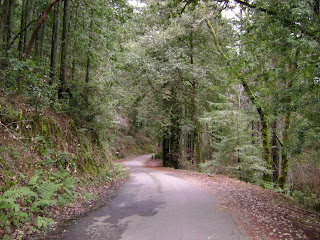 cuts into a hillside just south of Hwy 116 close to Guerneville. There are several stories of a spirit woman spotted standing in the road, and feelings of spirits along the way. You can check out some of the stories in: "Sacred Sonoma"-by Beth Winegarner.
VSPI did not discover any spirit(s) wandering the road; however, it is noted the area has a mystical feel to it and is rather beautiful to travel. It is warned, that as there are plenty of property owners, it is not recommended one go there to stir up activity, or to remove it. This can be dangerous as its believed the spirits thrive off the natural earth energies in the area. Any unsuccessful attempt at removal may drive the spirits into the homes of those who live there. Whatever spirits occupy the area, are best left alone.

Joy Woods/Joy Road: An area where a ley line is believed to travel through, intersecting further north with the Goat Rock ley line. Lesli and I drove from north to south on Joy Road, 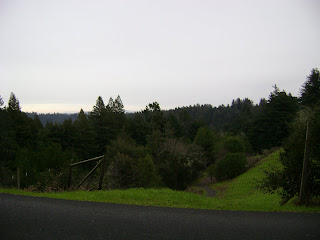 which travels through Joy Woods. It was a sunny afternoon, which later turned to drops of rain. A number of farms and private homes dot the area. We travelled up a hillside which the woods surround and cover, and then down the other side, coming out close to Bodega. What a beautiful drive this proved to be! We watched a small deer leap across the road at one point, saw the cutest kitty scratching itself on a fence post, and enjoyed the view of cattle roaming the fields below, from the top of the hillside. Natives were thought to have inhabited this area before the white man came. The Coastal Miwok may have been one of the tribes. Thought to be "enchanted" the forest may be home to many different types of spirits and faeries.

Please keep in mind, when travelling roads & areas that are thought to be haunted, ensure you respect the privacy of residents in the area. Remember, trying to provoke spirits or remove spiritual energy may cause changes & problems for those who reside in the area. Therefore, it is recommended you leave well alone.

Next we'll discuss the cemeteries we investigated, that are in the vicinity of ley lines and sacred areas of the county. Stay tuned!

Happy New Year!
your friend as always,
Kati
Posted by VSPIspook at 1:30 PM