As I mentioned in our previous blog, I thought I'd tell you about some of the cemeteries we visited at the end of Dec 2010 into the beginnings of the New Year 2011. They are: 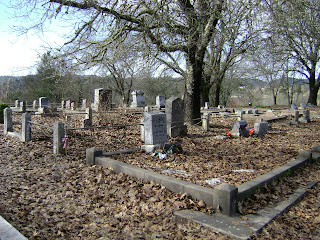 Forestview Cemetery - established in 1873, aproximately 5 acres and dotted with Russian Orthodox crosses. Although we did not have any spirit contact here, this small cemetery lays off the main road, and gives off a peaceful feeling. 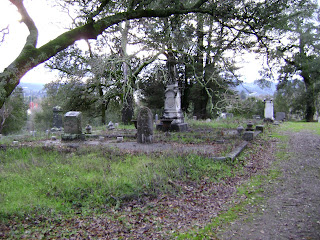 Oak Mound Cemetery - not known of the establishment date, however, the Cemetery folks advised it was in the mid-1860's & if we find any diffinitive answer to let them know. There are gravestones marked back as far as the 1840's, however, it was believed that a cemetery may have been near the town square, and due to a flooding, bodies floated up from underground. Therefore, they wanted to establish a cemetery on higher ground. Thus the cemetery today is on a hill.


Travelling the older part on the hill, we felt a pull in one area. Although our meters did not detect anything, using dowsing rods I connected with one soul. A feeling of sadness and a light headache, seemed to move around the small area. A mist is seen in the photograph. It was not there to our naked eye, but showed up in both the full spectrum shot as well as the normal camera shot, making this interesting.


The old part of the cemetery is littered with graves of founding families of the area, thus providing a wealth of history. 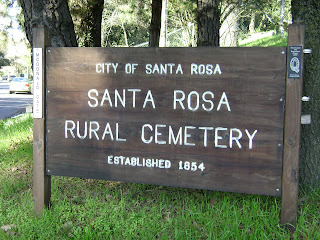 
Several stories are heard and shared about this cemetery:


1) Sarah Geneva Duffin (also known as "Neva") died at the age of 29 under mysterious circumstances. She died in Burke's Sanitarium (believed to be 6miles north of Santa Rosa), and is buried in the Stanely section of the cemetery. Dr Burke (head of the sanitarium) was arrested a few months later for attempted murder. He had placed dynamite under his mistress' bed and then dressed her wounds with arsenic. We researched this sanitarium, and found it was in Altruria, a town that flourished for less than a year when the townsfolk ran out of funds while building a hotel. Information about the Sanitarium date back to 1898, with notes that it was decribed as a health spa, treating all ailments from rhematism to kidney & liver disease, as well as head traumas, diabetes, obesity and so forth. The use of Mechano-therapy, hot & cold water therapy, electricity and diet therapies were some of the practices of the sanitarium.
Although we didn't find Sarah's grave site, due to mud and pond-like effect from the previous rains, she is believed to be roaming the area.
2) Mr Lemmon has allegedly been spotted near the pillars of the McDonald Ave entrance, with his gravesite nearby. Unfortunately we did not get to meet him, but stopped by his gravesite to wish him well.
3) Lt. Col. John Gotea Pressley, of the 25th Confederate Infantry, has been seen walking between his grave and the graves of Robert Press-Smith Jr & Sr. Their graves are situated across a way from the Lt. Col.'s family plot and are Confederate soldiers as well. Although we did not get to experience the alleged phenomena, we stopped by both sets of graves.
4) In 1920 a group of people took 3 outlaws from a jail and strung them up on a "hanging tree" (aka "lynching tree") in the cemetery near Franklin Ave. The 3 men were known to have shot and killed the Sonoma County Sheriff-Jim Petray, and 2 San Fransisco detectives, in a little house on 7th Street behind the Toscano Hotel (now believed to be Stark's Steak House). they were known to be members of a gang from San Fransisco and came to Santa Rosa to hide out, wanted for kidnapping and rape. No one was ever charged with the deaths of the 3 outlaws, as a Coronor's Jury returned a verdict before noon the next day, "death by persons unknown". Under full moon, one is said to see 3 bodies hanging in this area. The locust tree that now grows in the spot, is believed to be an offspring (or sprout) of the original tree. Our visit was during the daytime, therefore we did not see the ghosts of the outlaws hanging from a tree.

Wandering cemeteries can bring a whole host of feelings, from serenity and peacefulness, to sadness and anxiousness. However you feel, while visiting a local grave yard, always remember to be respectful of those who walked before us. Let the spirits know who you are and why you are there, before attempting to record them with photographs or voice recorders. Perhaps they will come out for you once you explain your reasons for visiting, and asking them for permission to record them.

Till next time,
Kati
Posted by VSPIspook at 12:58 PM