I'm sure we all have moments when we feel the hair on the back of our neck stand up, or when a chill comes over us when we feel something just isn't right, or how about when a cold draft hits us in a warm room without windows and fans, or we think we saw something but we are not sure and believe perhaps we were dreaming.. Yes, I'm sure plenty of us have had those moments. Do we listen to them? Should we listen to them? Are they more than just what they are? Perhaps..

I've had plenty of strange occurrences in my life. Most I've put aside thinking it was just a moment when things were just not right. Other times I've questioned them, but as time passed, and no answer came, I left them behind. Let me tell you about a few experiences I've had that have remained forever unanswered and still haunt me today.

June 26th, 2006: I was in Germany, visiting my Father's family outside of Wolfsburg. I had

asked to visit the place that was home to my Father's parents for so many years, from the late 20's to the mid-80's. I remembered a time when I spent an entire week at their makeshift home in the woods outside of the town of Tuerringen. It was scary for me back then; I was just going on 10yrs old and my Mother had wanted to leave me with these relatives I'd never met before, while she went off to visit with friends she'd not seen in years. The house was built by my Grandfather, who was a painter by trait. It had an outhouse built of stone, a few steps outside; and I remember having to sprinkle pine needles after I did my dead, so that the smell would be nice. There was no electricity, instead they used oil lamps. A barn shed was built along the side of the house, where the sheep, chickens and one cow was kept. So at night it was a bit frightening for a child. In the dark you'd have to find your way outdoors and to the loo, and of course the animals made noises all night long. I simply was not used to this.
Regardless, my Mother did not leave me alone back then, because I threw a crying fit. I later enjoyed my week with my Grandmother. She simply was amazing! A school teacher, poet, rather great cook (all the food was from their garden and the woods surrounding the home), and a wonderfully caring woman.
Back to my trip in 2006. My Aunt, Uncle and Cousin drove me to the tiny town of Tuerringen. There we parked the car, visited the gravesite of my Grandparents, who both passed within a year of each other (in the mid-80's), and planted 3 miniture rose plants along side. One for my siblings, one for my parents, and one for me. I then read a poem I had written, and had a moment of silence filled with tears. It was a hot day, 40C, with no breeze. I

felt eyes on me while I was sitting there. It was strange, for the others were waiting outside of the small cemetery by the car. Finally I felt it was time to move on and we all went on a 30 minute walk into the forest outside of the town. Soon we came across a sign that read "Ackermann's". It was high up in one of the birch trees. My Aunt pointed it out, and said that we were close. When I saw the house and barn, I was in shock. I had remembered it well, but now it was caved in, lumber and bricks trashed all over, and the only thing standing was the outhouse. It was clear that vagrants and teenagers had been by, celebrating with drinks, and trashing the site. There were mosquitos everywhere, bugs flying around, and the air was stagnant. As I stood infront of the outhouse, digging up memories of fright at night, I felt a hand on my shoulder and I knew things were alright. It was strange, for my family was scattered around the ruins, looking under planks of wood and such. No one was nearby.


March 2nd, 2007: I was part of a paranormal investigation group, and we headed out to the oldest elementary school in Vancouver BC, Strathcona Elementary. There had been reports of odd occurrences in the gymnasium. So our team unpacked all our gear in the gym, set up on the stage, while I took my camping chair and set it on the floor infront of the stage, looking towards the "exit" sign & door way across the gym floor. I had a sense that something may happen infront of me, and that i needed to face that door. After the lights went out, and a team was set up on the stage, another in the bleacher stands above the "exit", and everyone quietly doing EVP sessions, i took out my camera and got ready for whatever may occur. I really didn't expect anything, and we sat for some time before a chill came over me, and there infront of me was a woman walking from the "exit" door straight towards me. She had blonde hair in two pigtails, a 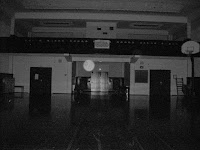 swing skirt on, a white blouse, and a big smile. She seemed to be floating in a bouncy manner. I didn't even think to look at her feet to see if they were moving. I was mezmerized and in shock. My team leader was behind me, with a camcord, and as she faced the door (in the same direction I was looking at), I heard her clearly say "there's a blue orb coming over your head Kati!" and at that moment I took a photo. Within a split second the woman was gone, and a feeling of "happiness" and "relief" washed over me. What had I seen? Was she truly there? Later when I looked at my photos, I saw what many may say is an "orb" and others may say is dust. The thing that stands out on this is, that it was taken at the time I saw the woman, and that there were no "dust orbs" in the photos before or after. So I wondered, was it her movement that caused this dust orb to appear? Or what? Perhaps it's dust, perhaps it's just a moment, perhaps it was nothing at all. I have the memory of what I saw, and that to me is proof enough.

August 31, 2007: My long time companion, Lucy-furs, passed away on this day. She was a kitty I had rescued from an abusive home, where the man in the house threw her against the 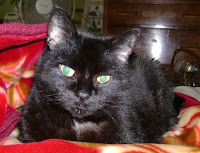 wall on a regular basis, and had burnt her whiskers to a crisp. She was 3 months old when I came to know her and steal her way. It took a few months, but after a quick move into the city and away from harm, Lucy-furs (who had been known as "Iggy" by her previous owners), became my best friend and angel. She saved me when I went through a bout of depression, by just being there for me. We both had saved each other. She spoke to me on a regular basis. Well, it seemed like she knew what I was asking and she'd respond in a series of meows. Lucy would follow me throughout the home; we'd eat together during meal times, and she'd curl up next to me cuddling against my body during sleep time. We were inseperable for 16 years! Then she was diagnosed with cancer in her ear drum. It was a very scary time. I was lost in what to do, and for 3 weeks, she had become so weak she could not eat, i fed her with a syringe. I finally realized it was her time to go. It took all my strength to let her go to be with the stars and angels. I prayed every night that I was making the right decision. Several weeks prior to her last day (I believe it was two weeks), we were both laying in bed with my other beloved kitty, Sally-Wally, laying on the pillow next to us; when I felt the back of my pillow push down and a light thumping cross the pillow onto the bed and over my body onto the blanket next to Lucy. I was stunned. What could that be? This happened each night until the morning of the day when Lucy-furs and I had the appointment with the vet to put her to rest. It stopped directly after Lucy passed on. All I could think of is that my kitty from childhood, Mushie, who had come to take Lucy from me. It's a good thought, and it was the first thought that popped into my head when this all came to be. I just felt that it was right. Mushie and I had been inseparable when I was a teenager. She had passed on when I was at school, and it was the worst time during those years for me. Here again, I was facing the "worst" time. I was loosing a precious soul.
A few months later, I know Lucy-furs had been visiting with me on and off. I saw a toy of hers move across the floor, and for a few nights I even felt her laying next to me. I'm sure she stopped in now and then until I was ready to let her go. I shall never forget my angel. I have half her ashes put into a plant I recieved after she died, and the other half in an urn by a memorial I created for her. I just feel it when she drops in, but it gets less and less as time goes on.

These are just a few of the experiences I cannot let go. There are plenty more. A woman I saw sitting at a bus stop, yet as I drew near she fizzled before my eyes. A feeling I had on a hot summer's night in a cemetery that someone was standing next to me.. and so on. I'm sure you can think of similar experiences. The question is, are they truly those from the past trying to reach us? Or are they just a part of our imagination, need to believe there is more after we pass on, or simply a way to feel better about our life on this earth? Then again, could they be a message meant for just us? mmmm.. I wonder... and then of course, there are the stories I've heard from family and friends about their experiences..

share your thoughts & experiences with us by sending a comment to this blog. I'd love to know that we are not alone in what we have seen & felt.
sweet dreams!
kati
Posted by VSPIspook at 10:10 PM