Hello Friends,
I've been investigating and researching the convicts of BC Penitentiary who are interred at Boot Hill Cemetery in New Westminster, BC. It's not an easy task, as I often come across barriers which hold back any progress. Never-the-less, it is an interesting project. As I come across further information, I'll present the updates in future blogs.

So here we go, the second inmate on the list:

John's gravemarker is difficult to read; however, we had the assistance of a map that led us to where his body is interred. The photo below shows Convict #5603 at the bottom with #2370 above it, appearing as a small stone.
In order to get a better understanding of who Mr. Walsh was, I went in hunt of newspaper articles and birth/death certificates. I began with his death certificate. A vital statistics certificate confirms John's death on December 03, 1918 due to suicide. He had hung himself, causing strangulation. I wondered why he chose this way out from life. The certificate provided a clue. It stated John's condition was "insanity". So what does that mean in today's terms? There are so many possibilities. Due to lack of medicines, medical understanding and so forth, "insanity" may have been labelled for anything we can manage in today's world.

Next, I went in search of his reason for imprisonment. What was John's crime? How did he get to the B.C. Penitentiary? How long had he been incarcerated?
The death certificate helped to answer some of these questions. It indicates Walsh had been in the facility for 4 months and 4 days. This provided me with a point of reference for my search.

I located several articles published in 1918 of the Vancouver Daily World newspaper. Here is the earliest one, dated May 16, 1918. 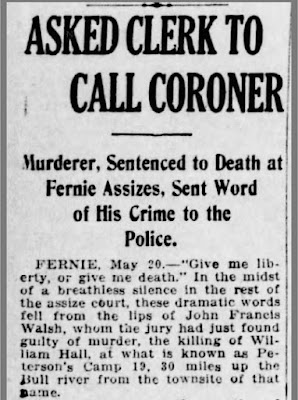 John Francis Walsh was found guilty of the murder of William O. Hall at a campsite, 30 miles up the Bull River from a town-site with the same name in B.C.
Bull River, BC is situated in BC's southeastern corner, close to the USA and Alberta borders. The murder occurred in Peterson's Camp 19 in a bunkhouse on November 18, 1917. Walsh claimed he had killed Hall because he made an attempt on his life. In the Supreme Court of B.C. at Fernie, Walsh admitted he had been previously convicted of manslaughter in New Brunswick, but was released on parole after serving three years. However, when he didn't report regularly to the parole office, Walsh was placed back into prison to serve a further four years. Also discovered was that he had a previous drunk conviction. The jury's decision took only four hours, and was a "murder conviction" with an execution to take place on July 29, 1918 in Nelson, BC.


The Montreal Gazette announced a trial held in 1897, at St. John, New Brunswick, which describes John Walsh having murdered John Meahan in a drunken brawl by hitting him on the head with a stone. The verdict was of "manslaughter" with a recommendation of mercy.
John had told the truth about his previous conviction. This, I am certain, would have weighed heavily in the minds of the Jury and Judge in their decision.


So how did he end up in New Westminster at the B.C. Penitentiary? I had to find more information, and thus searched for articles after the date of May 1918.


The above article indicates 10 days prior to execution, the Minister of Justice commuted Walsh's sentence to "life imprisonment". This explains why he was brought to the "Pen" in New Westminster, B.C.

What was prison life like at the B.C. Penitentiary in those days?

The government appointed John Cunningham Brown (former owner of a newspaper, postmaster, mayor, and had represented New Westminster City in the Legislative Assembly of British Columbia 1890-1894 and 1900-1901) as Warden in October 1907; while William Carroll was promoted from hospital overseer to Deputy Warden in December that same year.

From the book "Four Walls in the West" by Jack David Scott, a description of the year 1918 : "The First World War years in the penitentiary were largely uneventful. The inmates were busy on building projects and discipline was good. Better rates of pay kept staff standards high even when some guards went off for war service. In 1919 the Spanish influenza epidemic, which had hit the western world, made its appearance in the prison. Eighty-four convicts were hospitalized and five died."

While in search of a typical menu of the times, I've discovered thus in the late 1890's a "bread and water" diet with a dark cell was imposed to those who were punished for disciplinary reasons. Oatmeal porridge has also been referred to in the 1890's as an evening meal.

It was noted that raising hogs enabled the Warden to allow prisoners to eat pork instead of beef on occasion, while on Sunday mornings they were served mutton stew. Fridays at noon, a serving of salmon was given to every convict.

Back to the search of Mr. Walsh's path in life, the next article found from the Vancouver Daily World was dated December 05, 1918. It describes John Francis' manner of death. 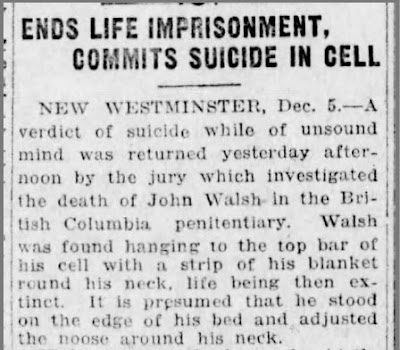 The article lends us clues as to Walsh's beginnings. It states he was Irish, a rather large, powerful man "and dangerous at times." I went in search through Ancestry for records of birth in and around the 1870's (his death certificate didn't give us a date of birth, other than an age of 44); however, there were so many records found between the years 1873-1877 with his very name.

Thus, I decided to move my search to New Brunswick using references from articles found. Alas, I found that John Walsh was an extremely popular name. In order to view newspapers of the Province from the early 1900's it requires I visit the archives. There my lead ends, as flying to New Brunswick is not in my path of life at this time.

I sought records of John Francis Walsh's born in Ireland and/or New Brunswick, in and around the 1870's, in hopes to find immigration records or passage records. Another clue from the death certificate lists John's previous occupation as "Blacksmith". Perhaps this is a learning passed down by his father? Needless to say, a flood of information didn't narrow the field for me.

I performed a search "convicted of manslaughter 1900's Canada" and found this tidbit in a report called "Persons Sentenced to Death in Canada 1867-1967: An Inventory of Case Files in the Fonds of the Department of Justice" - National Archives of Canada 1994. It provided me with helpful information.
Through my search, feelings for the victim in this violent crime, William O Hall, grew and grew. I decided to search for his information. Perhaps this would lend some insight.
Mr. Hall's death certificate indicates he had been in the area for approximately 3 months, and that he had died due to a "blow from an axe to the head". A married man, originally from England, with an occupation listed as "tiemaker". His body was taken to Minnesota.


So many questions arise with this. Was he a father? Was his family living in Minnesota? Was he looking for work to take care of his family, and thus lead him far from his home? What must work conditions have been like in the camp? Why did he travel so far from home? Had his family travelled with him, or did he leave them? What truly happened?
I had to remind myself of Walsh's prior "manslaughter" conviction in St. John, New Brunswick. Walsh's actions caused the tragic demise of two victims, and had affected the lives of their families and friends.

I searched through Minnesota and English records finding several families that may be connected to Mr. Hall. One document from a census in the USA of a William Hall, age 9 (in 1870 - that would make his birth 1861), son of a blacksmith. Could this be him? A census record of 1871 England indicated a William O Hall (under 1 years old) had lived with his Uncle, nieces, nephews and a sister. With his death record showing a possible age of 55, I would suspect he was born in the early 1860's; therefore, I am not convinced the English census record to be William.

I have to question why Walsh would attack a man said to be sleeping in his bunk. Was this a sign of his "insanity" progressing? Were the two men unable to work together and carried some sort of animosity? One of the articles indicates those in camp were "not satisfied to work in the company of the accused". Did Hall wake after the cook left the bunkhouse, and attacked Walsh? It is unclear. Was it only the two men in the bunkhouse? If so, where was everyone else?

Never-the-less, it feels like a senseless crime. Personally, I would be one to back out of a possible violent situation; but this is not what happened, nor may we fully understand what went down in the camp to end in a death.

So I bow my head with condolences for William O. Hall and his family, and Walsh's prior victim and his/her family, in the hope their souls have found peace.
** A robin just landed on my balcony and chirped out a song. I would like to think this is a sign.**

The search goes on using all the information I've gathered thus far. For now, we have a new understanding of who John Francis Walsh may have been. Hopefully this helps to bring some peace to the little plot of land that carries so much "dark" energy of Canadian history.

On a side note, during my last visit to Boot Hill Cemetery (aka: BC Penitentiary Cemetery), the spirit of a rather large man standing at the top of the plot of land (near his grave marker) was sensed, watching my friend and I. At one point, the medium I was with, felt this energy stepping into our space as if to back us down from our pursuit. Was it Walsh? Did he know I would be embarking on this journey to discover the stories of the B.C. Penitentiary Cemetery convicts?

If anything, my hope is that the souls who are "stuck" at the cemetery can eventually move on. Every person deserves peace, no matter who they were in life and which path they chose to take. Not everyone would agree with me. Perhaps, wherever we go after our life on this earth, there is a level of forgiveness for our darkest actions. I was taught to be kind and love my neighbours and enemies, no matter who they are.

I am uncertain as to how I feel about the accused; though, with the case of Walsh, I hope he felt shame, guilt and remorse before he took his own life. A man who was convicted of two murders and was considered to be "insane" and "dangerous". How does one feel about him? What drives a person into such depth of darkness; and, can we stomach to forgive someone like that? I am of mixed emotions right now. I have to take time to breathe and see what tomorrow brings.

May they all rest in peace.

Posted by VSPIspook at 7:35 PM