In a Hail of Bullets .. (Convict Interred at Boot Hill Cemetery)

This time we take you on a ride of an "explosive" nature involving burglary, "safe blowing" and attempted murder with a hail of bullets flying through the air! It made the front page news in Vancouver, B.C. in March 1913. With this, we introduce you to our newest entry in our search of understanding the convicts buried at the New Westminster "Boot Hill Cemetery" for the B.C. Penitentiary.

Who was James? His death certificate gave us several clues.
Mr. James W. Hinds was born in Pittsburgh, Pennsylvania U.S.A. in approximately 1860 and died on the morning of May 08, 1918.


I went on the hunt for a birth certificate, but could not locate any. Instead I found an 1880 Census taken in Jackson Township, Pennsylvania which confirmed a James Hines was living in Huntingdon County as a student. Each time I conducted a search I came up with the family name of "Hines" indicating Irish ancestry through the parents. There were several "James Hines" but no "Hinds". Of course I have to keep in mind, that somewhere along the way someone may have written his name incorrectly, or he may have changed it. Never-the-less, with the death certificate telling us in 1918 he was approximately 58 years old, single and white, I may put this assumption forward.

Another note of interest is the Physician who signed his death certificate indicated he'd been attending James since his admission to the prison, which was 5 years and 2 months earlier, sometime in March 1913. Here we have a starting point. What happened in 1913?

Before we jump ahead I want to examine further clues. It was also noted he suffered from "perforating gastric ulcer", which by all accounts is painful. In 1913 one solution was to suture the hole in the stomach closed; however, this wasn't a confirmed remedy and often due to the acid gastric juice, patients would never heal. Another remedy was said to take a vacation near the ocean. Well, James was near the ocean when he found himself in prison, but a vacation?

Another clue was James' former occupation listed as a "miner". That is a big clue. I thought about where men went in the 1800's to early 1900's to mine? Through research on the subject I discovered there were several noted gold rushes in the United States and Canada, beginning with the first in 1799 in North Carolina, followed by a rush in 1829 in the Appalachians, and then the 1848-1855 rush which led to settlements by Americans in California. This connected with the gold rush in B.C.'s Fraser Canyon and Cariboo regions, to the Rocky Mountains and north into Alaska. There were several noted rushes in the 1860's during the time of James' childhood, and then in the 1880's and 90's again in B.C., Alaska, and California. This repeated in the early 1900's. Was James one of the men who sought to get rich of gold? Through a Census search I found a record taken in April 1910 at Tuolomne, California in Township No. 4 which may match our convict.
The Census reads:
James W Hines - boarder (the owner of the house is listed as Arthur Davis, with his wife Mary, son Richard and daughter Thelma), from Pennsylvania of Irish/English origin, a gold miner who had worked at the job for 6 weeks in 1909, could read/write English, and self-employed. I found no other lead in the Census' of either the United States or Canada.

Next, my search led to Vancouver, B.C. and connected with an event in 1913 which introduced James to my hometown. My guess is James did not find his wealth in Tuolomne's mines; however, I did not find records to confirm this.

So what landed this convict in the B.C. Penitentiary? A nation wide search in Canadian newspapers led me to the following articles. Here is the first and most exciting article found: 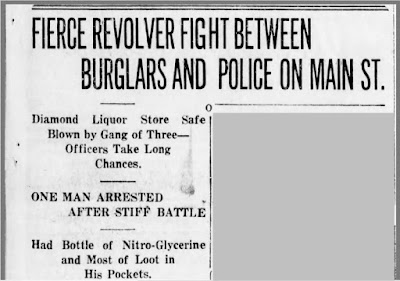 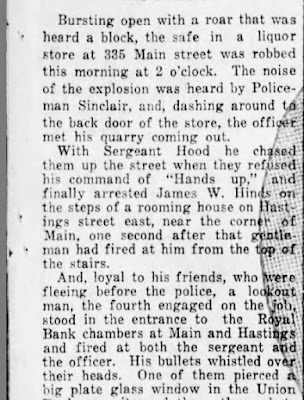 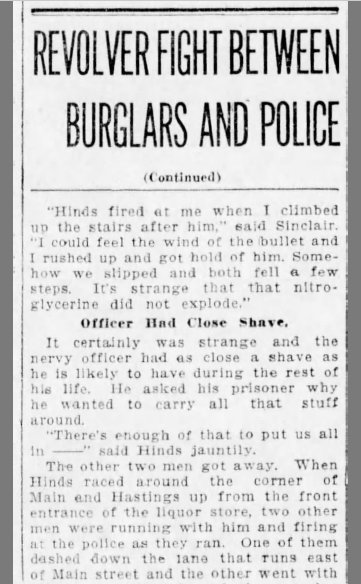 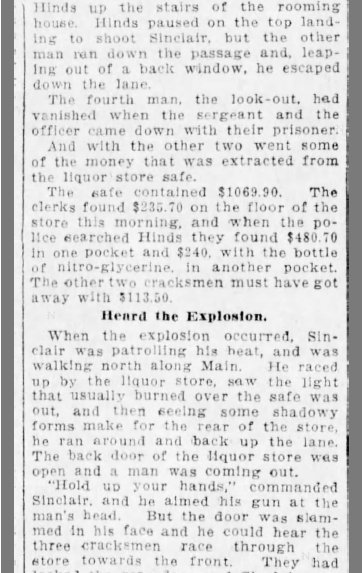 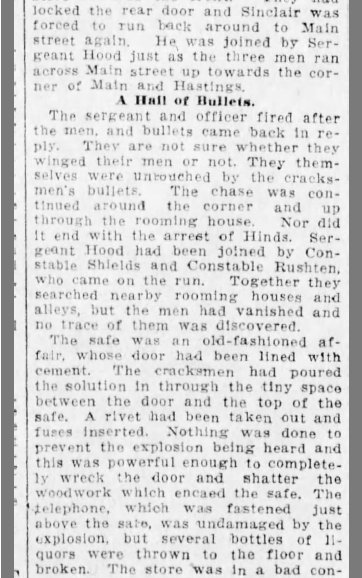 Wow.. this must have been quite the show down. So let's recap: James and three men decided a great way to make money fast was to blow a safe in a liquor store and make off with the loot. Unfortunately for them, a police officer and his Sergeant were nearby, heard the blast, saw a light, and ran to intercept the robbers. James was chased around a block and up the steps of a rooming house on Hastings Street near Main Street. A shot was fired at the police officer, which missed him, and together, James and the officer tumbled down a few steps, which led to the discovery of explosive materials in James' pocket. Thank goodness it did not explode. The other men appeared to have gotten away. Or had they? I am also drawn to James' description at the bottom of the article. A clean cut man.

James' name appears in Henderson's Greater Vancouver directories of 1910, 1911 and 1912. This leads me to believe he travelled to Vancouver after his mining stint in Tuolomne, California. It describes him as a "carpenter". Could this be the correct James? The 1912 directory shows this same person working for a Canadian Brewing and Malting Company, which is a link to liquor. If this is the correct James, the thought of robbing a liquor store may have come to him during his work with the brewing company. Perhaps he received information and an insight into the business. Each listing has the same address, and therefore is the same man. But is this our James? We can only guess.. but it certainly matches what we have come to know.
Next I found an article about the following day's court proceedings. 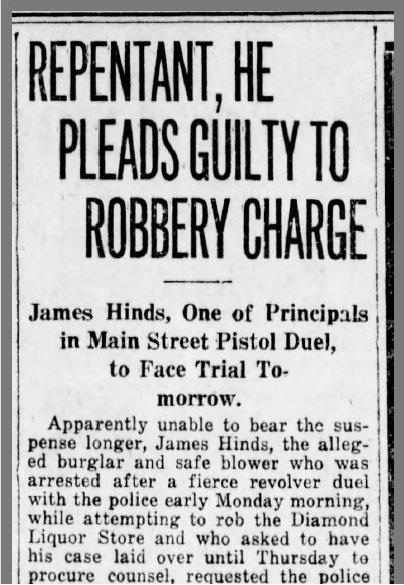 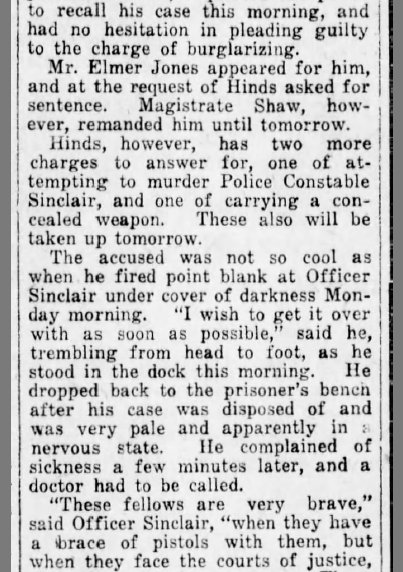 Mr. Hinds was facing three charges: robbery, attempted murder of a police officer, and carrying a concealed weapon. After pleading guilty to the first charge, he fell back into the prisoner's bench and moments later complained he felt ill. Was this the beginning of his ulcer? The above article continues informing us they did capture another man, "Shorty" Craig (aka James Miller as well as James Jackson) who carried not only a revolver on him, but also a stolen watch from a previous reported hold up of a North Vancouver man.

The following day, on March 19th, we discover that James plead guilty to two charges with the third being dropped, and was sentenced to 15 years in prison. 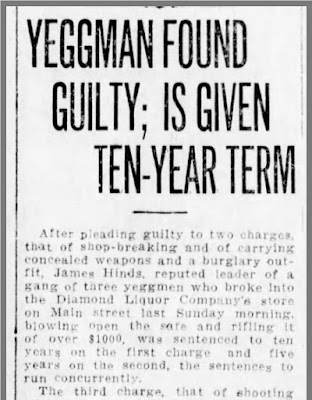 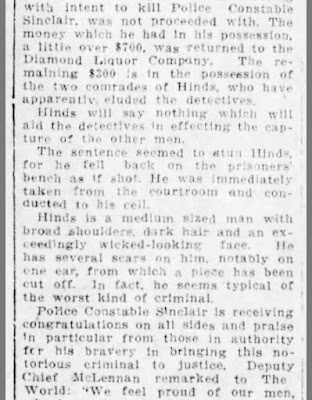 Before we go further, please take note of the fifth paragraph describing James' appearance as "the worst kind of criminal". I gather the clean cut view is no longer in agreement with the journalist. With this picture of James, I wanted to find out about "Shorty" Craig's charges and their assumption he had been an accomplice to the robbery. Fortunately, the newspapers continued to report on the case.
First I found a short article in The Delta News confirming James' sentence:
Next, I found the account below of how the police suspected Shorty to be one accomplice to James, and caught him. 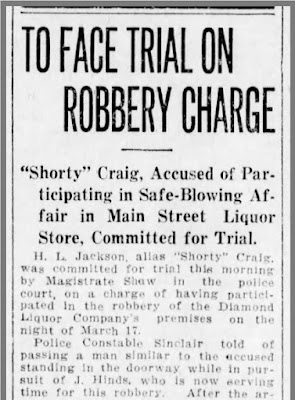 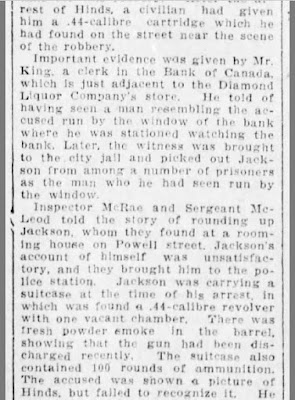 We understand that Jackson (aka "Shorty" Craig) declines to finger James Hinds. Most criminals are loyal to one another, keeping the code of "silence". No one wants to be known as a snitch. This article, however, does not tell us what sentence, if any, Jackson received. My search continued. 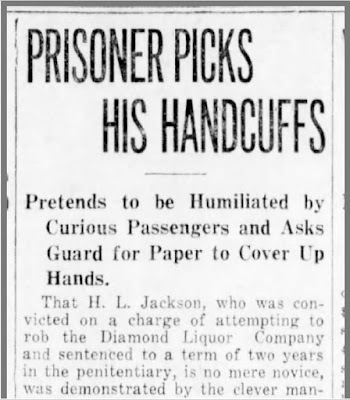 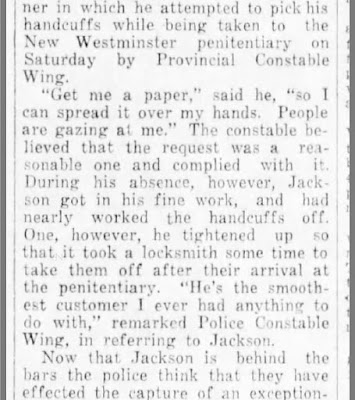 Jackson received two years for his involvement in the robbery conviction, for which James had received 10 years. It makes me wonder why the difference?

What I found interesting, was an article in the Vancouver Daily World in April, which highlighted a needed change in how policing is done and presented the officers involved with advancement in their station. I was also drawn to the number of crimes committed during that time. 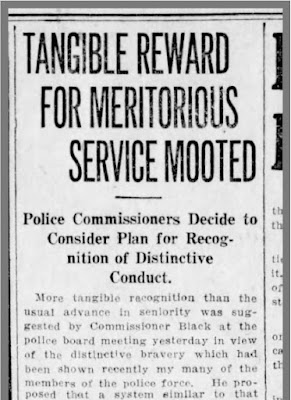 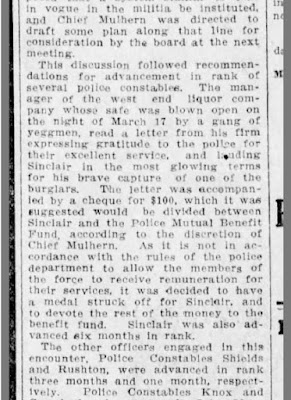 678 convictions, 228 dismissals and 22 committals for trial. Interesting! Those numbers seem to be high. What went on during that time in Vancouver? Why so much crime in such a relatively young city (approx. 27 years old)?

From a book called "Vancouver's First Century, A City Album 1860-1985" we learn that Vancouver was going through a population boom, jumping to 115,000 by 1913. An influx of people from Britain in 1912 represented over a third of the population. In 1914 many businesses (from trust companies to suburban merchants) suffered financial collapse due to over expansion and a depressed world market, leading to a large number of unemployed. Had James lost his job at the brewing company?

"Chuck Davis History of Metropolitan Vancouver" book confirms the financial depression Vancouver was experiencing, and marks this as a highlight for 1913. The previous year, it indicates the Vancouver Police received fingerprinting technology. 1913 was the year famous poet Pauline Johnson died of breast cancer, and the Orpheum (not the same building as today) reopened including vaudeville acts. The Vancouver Police requested a six day work week, rather than the seven days they were on duty; but, as in 1910, their request was shelved. The unpaved Pacific Highway opened (now known as BC Hwy 99), running from the Fraser River to the United States border with a tent at the border crossing. Due to the miracle of dredging, Granville Island (today an important tourist draw with a market, hotel, shops and a concrete factory over 90 years old, plus more) reached island status. Streetcar service connected Vancouver to North Burnaby. It appeared Vancouver was growing during its financial woes.
This is where our journey of research on James W. Hinds ends. I could not find further records of James' life in the area, nor of his death, outside of the Death Certificate. He led an adventurous life travelling from Pennsylvania to California and up the northwest coast to Vancouver, to have it end at the age of 58 years. We found a path which led him from school to following that of miners to California, then travelling north to Vancouver where he was listed as a carpenter, labourer at a brewing company, and ending his career as a burglar. With the world going through financial collapse, jobs becoming scarce, it appears he chose to take what was not his in order to survive.

We thank you for taking this journey with us in learning a little more about one of the convicts buried at the B.C. Penitentiary's cemetery called "Boot Hill". Without family to claim his body, he was laid to rest in the little plot of land on the hill overlooking the Fraser River.
We will now move on to another convict, and hope we find some interesting news items and history that will continue to help us understand who these convicts buried at the little plot of land are.

Till next time,
Kati