I sat in my hallway, candles flickering around me. A crystal, feather and seashell on a stand in front of me to represent our earth, the air and oceans. I positioned a variety of electromagnetic meters, a vpod (creating its own energy field around the antenna which spirits are believed to manipulate for communication), digital recorder, and my pendulum in hand.
Calling out to spirit(s) is something I believe may work from anywhere that I am, but I’m still working to prove this theory correct. As long as it’s a place where I can concentrate and find peace, it works for me.
Note: I want to stress, I ground myself first and put protection of “white light” and my ancestors’ love around me before I begin.

What brought me to this point? A client reached out to VSPI. She lives out of town.. well, across the province to be exact. It’s not like we can hop into a car and be there in a few hours. She contacted us because of "unexplained activity" in her home. She was frightened. There appears to be a shadow man who attacked her child in the night, with odd sounds and occurrences taking place throughout the home, dark dreams with choking, and a scary feeling within the basement. Her husband had been renovating the house he purchased 16 years earlier. Ever since, the activity had been spiking. Three mediums advised her (on separate occasions) of a vortex in her basement which is allowing negative energy to flow through the house. They also advised her of an older gentleman in the child’s bedroom who may be the original house owner; and one told her a First Nation’s Chief standing on a staircase trying to prevent the negative energy from flowing through to the upstairs. One medium visited the home and has refused to come back. The client was at a stand still and didn't know where to turn for help. Then she found VSPI.

Listening to this young confident woman, I could hear an anxiety building and taking hold. She shared photos and a video with me through email and text. We reviewed them together, and I was able to bring her some peace of mind when it came to the "orbs" in her basement. But the video? There was something dark that jumped in and out of frame. To me, it was unexplained, but I went on to reassure the client that we would help and get to the bottom of what is going on.

That evening I sat quietly with my pendulum in my hallway (it appears this spot is the best place in my home to connect with the "other side"), a few candles flickering, and I called to all the spirits in the household, asking them to “please stop scaring the client and her family, as I have been called upon to help them find out who you are and what you need or want. Please give me a few days to do this and I promise I will find a way to bring everyone peace.”

I began researching the family who resided in the house when it was built, the neighbourhood, and the entire area. The information I found was rather interesting and heartbreaking, dating back to the late 1800s with mining and lumber being the main resources of the area. History shows that Hudson Bay Company employers (fur-traders and company men), European settlers, gold miners and loggers arrived in to the area throughout the 1800s and basically took the land away from the Ktunaxa Nation and pushed them into reserves; while Jesuits forced Christianity on the natives and created a residential school in the area. This school, and many like it across Canada, was built in the 1890s and placed horrendous punishment and segregation on an entire nation of indigenous people. Other information found a large number of recorded deaths due to the industries, drownings in a nearby river, vehicle accidents, and even murder-suicides. The original home owners (in the 1950s) and their son had long passed on, survived by a daughter who is now in her elderly years. The father (a postmaster) died in an ambulance on the way to the local hospital in 1986; while the son, years earlier in 1968, had died in his apartment while attending a technical school far from home. The mother passed away at an old age in 2004, and had been living in the house on her own since her husband’s death. Her daughter had married and moved away years earlier. The three are interred at the local cemetery only a few blocks away from the home.
My senses confirmed the father was haunting the home. Why? I’d have to find out. I also sensed a female energy was present. I had two thoughts: travel to the home and perform an investigation and vigil, or try calling upon them during a vigil at my own home. As travelling was not possible at the moment, I decided to try the other idea.

So there I was, sitting in my hallway. I turned on my recorder to document my session and picked up my pendulum to assist me with communication. First I called upon my guides, my ancestors and those who love me that have passed on before me, for protection and guidance. Next I called upon the mother. A feeling overcame me. A chill travelled along my spine that felt like bubbles rippling up and down rapidly. I began to feel sadness, and wanted to cry. I asked her to confirm her presence and heard two knocks coming from my bathroom. At the same moment my K2 meter jumped several colours from green to orange (the colour range is: green, yellow, orange and red). It felt true, real, as if I was a part of her. Instantly the answers came to mind as I asked questions about the home. Was her husband in the house? Yes. Did he need help? Yes. Was she connecting with him? No. Could he see or hear her? No. Did she need my help to connect them? Yes. But first I had to ask what the neighbour was to do with dolls his mother had received (she passed away recently) from the mother? “Call my daughter”, was what I heard within, “she will decide”.

I called on the father. His energy felt different. It swirled around me, shifting to a deep confusion and anger. He had enough of being “stuck”. Yes, I felt he was stuck in "his" home. His energy felt like a dread had entered my body with an increase in anxiety levels. I am normally a solid rock, and making decisions comes easy; however, this man made me feel like I had no idea which way to turn. My body felt as if it was draining and I had to reach deep to gain control. I began asking him questions, but I heard (in my mind) the voice of the mother responding. She wanted me to hurry and connect them. Again the K2 meter jumped up several colours landing on the furthest notch of “red”, and stayed there for at least a 5 second count. Then it blinked back down to yellow and then the green light, which is always on when the device is in use. The mother indicated her husband had been very sad since his son died, he hadn’t realized he died in the ambulance, and was afraid as he could not find his family. Instead of asking more questions, I decided it best to move forward. With the help of one of my ancestors, we opened a door which allowed them both to see and touch one another. I could feel the rush of joy hitting me; and so, giggling, I asked them to take hold of each others' hands and walk through the door together towards the next stage in the afterlife. It was quick and felt so very warm. It was over in split seconds. I asked my ancestor to close the door behind them. It was done. The energy lifted and I felt a shift back to normality.

Is this real? Can I truly call on spirits and have them connect with one another, helping to pass on to where they should be? I question my abilities each time I attempt this. I should just be confident. In all truth, I feel that I was called upon to help people and the spirits of their home. I will never say I’m 100% accurate. We all have failures within our life. It is my belief in spiritual energy, and that “they” sometimes need help too, which keeps me strong.

A week and several days later, I spoke with our client. She advised the house had fallen quiet and still after our initial contact. I let her know I had reached out and asked the spirits of the house to stop everything because I was going to help. Believe me; hearing that from her was like magic! It helps validate what I do. After discussing the information I had found, I suggested a proper cleansing of the house and that if there is a vortex, a closing of it. The client didn’t feel she could do this on her own, and personally I felt she was frightened to do so. I promised her I would figure something out. 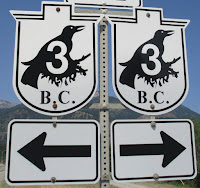 It so happens my wife is flying in to Vancouver next weekend. We have decided a road trip along Highway #3 (called the Crowsnest Highway) would be an exciting way to discover old Ghost Towns and Cemeteries in the southern part of B.C.  One of our passions is to explore old graveyards, listen to their voice(s) and learn about the history of the surrounding area. This would also create a wonderful opportunity to meet our clients, help them to cleanse the home and seal the vortex, thus bringing light and love back into the house.

I just love it when everything seems to fall into place. It's like a 'sign' that it was meant to be. A calling from the Universe that we are on the right path.

Note: I always advise a good house cleansing after helping or ousting spirit(s) from a home. It helps dispel residual energy that may still be clinging on.

Keep an eye on our Facebook page for updates and photos. Perhaps you’ve travelled this highway and can give us some tips of places to stop and explore? We’d love to hear from you!

Thank you for your support. Wish us luck!
Talk soon!