Today we find ourselves following the trail of Vancouver's finest detectives in search of the truth. We are now publishing our sixteenth blog about the convicts buried at the B.C. Penitentiary Cemetery known as "Boot Hill", and the first case involving a "gang of thieves" in Vancouver's East Side district, Main Street with Chinatown in its midst.


News comes to us via the Vancouver Daily World at the end of 1915. "Thieves Clean Out Main Street Store - Tailor Shop is Swept Clear of the Entire Stock." This is shocking! The article is hidden on page 17 of the biggest newspaper at the time in Vancouver. This is because in August 1914, Canada was pulled into World War 1 when Britain declared war on Germany. Since that moment the newspapers were filled with daily news from the front lines.
Frank Spatari, born on April 16, 1880, arrived in Vancouver, B.C. from Italy in 1905 when he was 25 years young. Although his Death Certificate (deceased: February 28, 1960) indicates he last worked as a Tailor in 1955 and was in the business for 35 years, this cannot be accurate. We find his business first listed in the 1907 Vancouver City Directory listings. Frank was 27 years of age at the time. This would indicate he was in the business for a minimum of 48 years.
*1907 - Frank's business first appears in the listings at 37 Hastings East, at the Klondike Hotel Rooms. At age 27 he was an entrepreneur.
*1908-1909 - Frank is listed as "Spatari & Battistoni Tailors" at 61 Cordova West (partnered with Louie Battistoni).
*1910-1914 - Spatari's business is listed at #4-61 Cordova West,
*1915 - Frank adds to his business with another shop at 608 Main Street.
*By 1955 - Frank Spatari's Tailors is located at 863 Hastings E, (with Olga Spatari listed as employee), 8 city blocks away (a 15 minute walk) to the east from the Main Street address, putting it outside of the Chinatown area.
The loss of inventory must have been such a shock for Mr. Spatari. The newspaper reports approximate loss of $1000, which in today's money is valued at $23,900.

Detectives were put on the case, and a mention made of similar operations was reported several weeks prior, thus the thieves were suspected to be working as a gang unit.

On December 28th, 21 Chinese men were arrested for theft and brought before the police court in Vancouver, B.C. due to an investigation and discovery of loot taken from several shops over the last few weeks of 1915. The piece of evidence which cracked the case was a bucket from a book shop, which two detectives traced to a residence on Keefer Street (in Chinatown). Upon discovery the premises were searched and in the basement evidence was found from thefts that had occurred at several of the nearby shops. This broke the case wide open and the detectives were joined by the Deputy Chief, an Inspector, and several other detectives and officers in the search of the home and a round up of the gang members was made.

The dynamic duo, a description given to Detectives Joseph Ricci and Donald Alexander Sinclair, had only been on the force a few years but had honed their craft effectively, and were hot on the trail of criminals in the Chinatown and Little Italy districts.
Joe arrived in 1906, born in Italy, and joined the force in 1912, at the young age of 24, after his coat had been stolen. He was 5'8" tall, 150lbs and packed a mean punch. Joe went on to marry Germaine Paquette, had 2 daughters (Rosemarie and Louise), and was reportedly forced to retire from the force in 1928. Joe purchased the Royal Hotel beer parlour franchise, and in 1948 he opened West Coast Central Club (an exclusive club for members only) where he'd see some of his good buddies from the force again. A year later he became an official Italian translator for the police court. Joe suffered from a stroke in the early 1960s, leaving his daughter Louise to run the club. He passed away on December 9, 1966, due to 17 years struggle with heart disease, and colon cancer. He was laid to rest at the Ocean View Cemetery in Burnaby, B.C.
Donald arrived in 1911, and at the age of 29 years he joined the force. He married Agnes Patterson in 1912 and they had one daughter, Isabelle Jane, who was born in 1916. Sadly she passed away at the age of 22 in 1938. Donald died on August 29, 1937, and was buried in Vancouver's Mountain View Cemetery. Agnes passed away in 1978 at the age of 90. She is buried near her husband.
A great account of what kind of detectives these lads were, can be located in an online article about Ricci HERE. Give it a read! It's really quite fascinating. 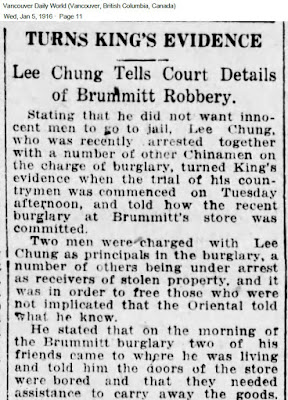 Our convict, Louie Num, is named for the first time in the news reports as a main figure of the Chinese Theft gang charged with burglary. Lee Chung gave evidence that he and Lem Mow assisted Louie Num in carrying goods from Brummitt's store to a residence on Keefer Street.
Two days later the newspaper reported that three men, Lem Mow, Louie Num and Sam Poy, were implicated in the charge of burglary. Several stores had been robbed, including Frank Spatari's (misspelled as 'Spereti's' in the article), Brown and Beaton's, and Brummitt's. The article confirms Lee Chung and Sing Lee pled guilty; while Lee attempted to appear less involved, Sing confirmed they were all equally responsible.

In all, five men were named to be involved in the burglary. Besides our convict, Louie Num, charged as principles of the Burglary are Lem Mow, Sam Poy, Lee Chung and Sing Lee.

A week later we learn Lee Chung was the one who "ratted" on his co-partners. He was sentenced to 3 years imprisonment. Lee was also responsible for the release of other men who had been arrested along with five principles.

Mr. Num and his gang probably thought they had a good thing going, but ultimately were no match for the city's finest detectives.

We did not locate any further articles about the case, and no further mention of Louie Num; however, we found a record of payment made to witnesses and interpreters used during the trial, in the Auditor General's report of 1916-1917.
Through Louie Num's Death Certificate we learn of his demise, and also learn some valuable information. Although we do not know the length of Louie's sentence, we can confirm he was committed to the B.C. Penitentiary on February 7, 1916.
Louie died on February 03, 1917, at 10 am due to tuberculosis causing heart failure, believed to be at the age of 26 years young.
Louie had immigrated to Canada six years earlier (1911) with his occupation documented as canneryman. He was born in China, married and most likely left his country to be able to find work (like so many others of his country) and send money home to his family. The certificate indicates he'd been suffering from Tuberculosis for 30 weeks (7.5 months). The disease was rampant during that time, and being in prison only made it more probable that one would contract it.

Records from the Warden's reports (John C. Brown) acknowledges his death, not by name, but by "race".
Chinese immigrants to Canada had undergone many changes in Vancouver by the time 1916 rolled around. In 1886 Chinatown was formed with just under 100 Chinese residents in the area, and by the 1890's over 1000 crowded into the area, often doubling up in single rooms. This brought on problems such as prostitution, gambling and opium dens. A Chinese Methodist Church was created in 1889. Businesses popped up in the area, and by 1905 two alleys named "Canton" and "Shanghai" were formed, with new tenement buildings, grocery shops, tailors, restaurants and such. In 1907, on September 7th, anti-immigrant riots exploded in Chinatown and Japantown, beating up residents, smashing shopping windows, and destroying stores. Chinatown encompassed the area of: Canton Alley - west, Hastings Street - north, Keefer Street - south, and Westminster Ave (named Main Street in 1910) - east. By 1911, over 3500 Chinese lived in Vancouver making it the largest settlement in Canada and 2nd largest Chinatown in Canada.

Little is found about the history of the shops affected by the robberies, but I persisted and found the following information:


I searched the city directory listings and compiled the following information:
William Brummitt first appeared in the city's listings in 1895. He began business as a clerk at the Hastings Mill Co (sawmill, 1st commercial operation of settlement that became Vancouver, the Hastings Mill Store is now a museum). He enters the clothing business in 1896, working as a clerk at I X L Clothing Store. By 1908, he finally opens up his own clothing shop at 20 West Cordova, and by 1912, three of his sons are working alongside of him. Also listed is a Charles Brummitt (not his son Charles-a salesman), but possibly a cousin (they have different parents, both from England), who is a cabinetmaker and was born in 1865. The Brummitt family was strong and big.
As I mentioned, William Bonner Brummitt died in 1946; however his business carried on for 2 more years under his son, Charles Brummitt, and then in 1948 it disappears from the listings.

Our search for both Beaton and Brown proved to be difficult. Not only are there many carrying the same last name in the Vancouver area, but when we searched Ontario records, there were several possibilities as well.

The drugstore didn't advertise like Brummitt's, but appeared numerous times in the Vancouver Daily World as part of other advertisement; such as in the ad below:
I located a photograph of James Alexander Beaton in the Ancestry website, but I do not know what timeline it carries. I hesitate to say it is James in his early 20's. One cannot tell with photos of long ago. He appears to be a bright, educated young man.

The City Directory confirms their drugstore first appears in 1907:
On further investigation, Brown(e) & Beaton's is actively listed until 1922, when it disappears from the directory and it appears Mr. Beaton pursues the business on his own.
We cannot be sure what happened to the Brown(e) and Beaton partnership, nor can we speculate. However on Brown's Death Certificate we are assured he stayed in the business as druggist, for it indicates he was self-employed for 25 years. On Beaton's Death Certificate it was documented that he had remained as a druggist for 50 years. Their partnership had lasted at least 14 years.


Thank you for continuing to take the journey of discovery with us about this little plot of land which represents those who passed away in the provincial prison system between the years of 1912-1967. We hope you enjoy our blogs and would certainly love to hear from you at our Facebook page, or comment to this blog, or via email at our website.

If you wish to listen to the EVPs (electronic voice phenomena) we've captured at the graveyard, click here.

Latest news of the cemetery is that the city has cleaned up the lot from wild brambles, weeds and grasses; and replaced the old stone markers with new ones. It is accessible to the public.
Until next time, take care to be respectful when visiting the cemetery. No matter who these men were in life, we hope their afterlife is one of forgiveness and love...